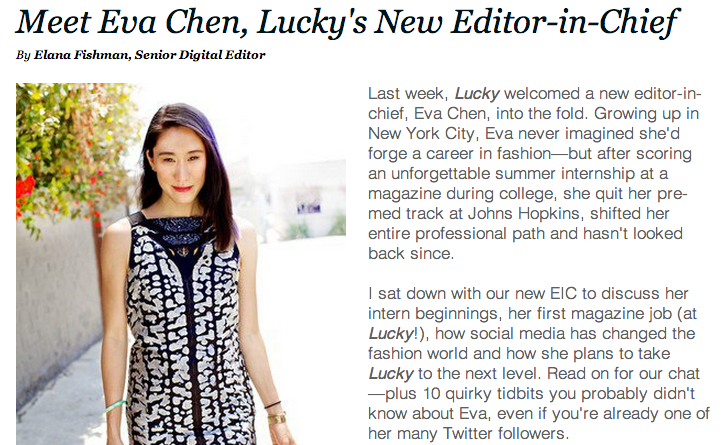 After Conde Nast announced that Eva Chen would be replacing Brandon Holley as the editor-in-chief late last month, many media outlets and blogs were clamoring to get an interview with Chen. However, Conde Nast PR shut that down and said that she was “behind closed doors working on the September issue.”

I thought they might wait until the first issue she worked on cover-to-cover was on newsstands, but I was pleasantly surprised to see that Lucky decided to scoop everyone and interview Eva themselves. Given some of the controversy surrounding her appointment to the EIC position, I think it was a  smart move on their part for the following reasons:

1. While Eva has a ton of experience she’s only Lucky magazine’s third editor-in-chief, which means that their readers have come to expect a certain type of editorial voice and culture within the magazine. And because she was brought in to give the glossy a much needed update, it was a good idea for them to go to their girls first on their own platform to start the conversation with Chen.

2. There was a lot of controversy and speculation surrounding her appointment so this interview gave Lucky a chance to cut through the clutter and begin to paint their own picture of who Eva is and why she’s a great fit for the pub.

3. Eva’s also a digital native and has a huge following on social media and I believe this move showed some of her digital prowess. Since there were a lot of people in the fashion world who were curious about her new role, why not drive all of that traffic to the Lucky site instead of directing it somewhere else? Smart.

← Know Your Worth
City Girl Diaries: Lots of PR Talk on the Style Network’s New Series →