Last Thursday, ColorComm, an essential organization for women of color in the communications industry, hosted an intimate discussion with Essence Magazine Editor-in-Chief Vanessa Bush (@Vanessa_KBush) as part of their Cocktails & Conversation event series.

Bush, a ColorComm Board Member, was interviewed by Stephanie Smith (@SSmithNYC), SVP and Chief Editorial Director at MSLGroup (the event was held at their lower Manhattan headquarters). 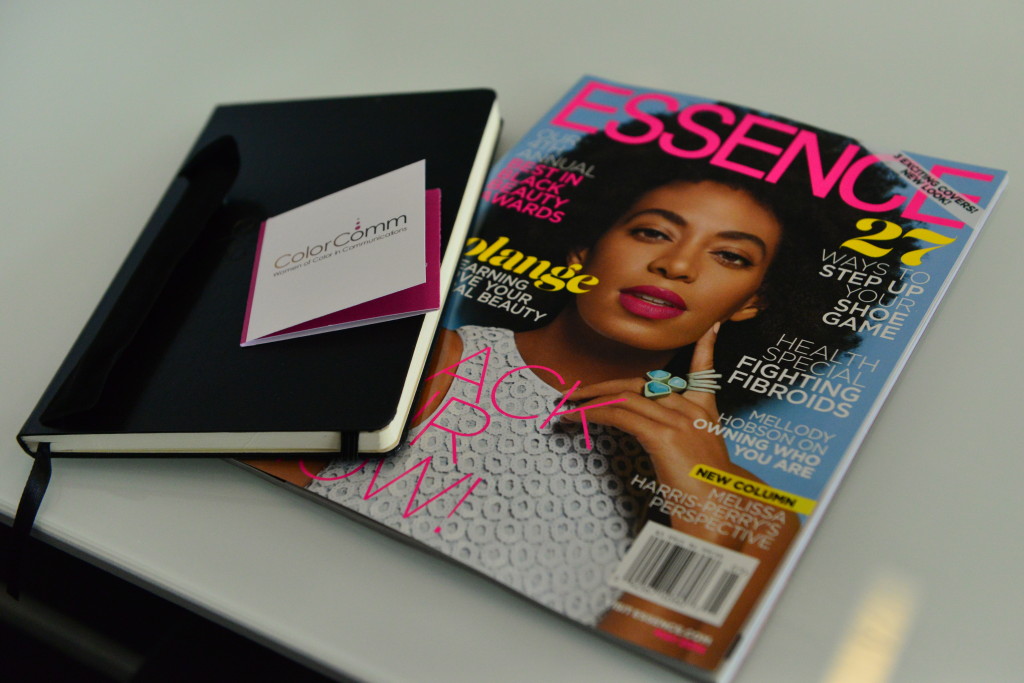 Vanessa provided candid advice and insight into her career journey, how she maintains her sanity and balances her personal life and her plans to enhance and uphold the Essence magazine legacy. Here are some takeaways and gems from the discussion:

On Making a Career Change at 31

Vanessa left a lucrative job in retail to satisfy her desire to work in publishing. At 31, she moved back in with her parents and accepted a position as an editorial assistant at Glamour Magazine making half of what she was making before and working side-by-side with colleagues who were fresh out of college.

During this part of the discussion Vanessa touched on a few really important lessons on perspective, perseverance and the importance of being relentlessly committed to your goals. Naturally when you make such a drastic career and life change, the people around you will have a lot to say and may even encourage you to abandon your dream(s). But Vanessa remembers focusing not on the “pain of the moment” but on “the possibilities” and would constantly remind herself that when she looked back on her career this transition would only be “a really small blip or moment” in her overall journey.

Vanessa believes that the “key thing about having a mentor is that it can’t go one way. ”  She talked about the importance of adding value to the relationship and never taking your mentor’s time or counsel for granted adding, “my mentors take me serious because I only reach out when I absolutely need advice or guidance on an issue. I respect their time and in return they are more willing to help me out when I need them.”

On Creating Balance in Your Life

Vanessa talked about the need for us to “make space” for ourselves and the importance of leading by example as it relates to creating balance. She told us a story about how she was completely immersed in doing the work when she moved  into the role of EIC over a year ago. But then she had an epiphany and realized that she couldn’t tell her team to have balance in their lives if she wasn’t doing it in her own. She made a decision then and there to tend to herself and her family and now she’s able to check out of work mode when she’s not in the office (even if it’s only for a few hours at a time).

On the Essence Legacy

During the Q&A segment a few of the women asked Vanessa about the challenges of keeping the print product relevant in the digital age and about whether or not the magazine has ‘sold out’ since its’ been a part of Time, Inc.

Vanessa was firm in her defense of the magazine and adamant that executives at Time, Inc. don’t have editorial control at Essence and don’t interfere or push back on the magazine’s editorial direction and decisions. She also touted Essence’s ability to reach readers where they are, whether it’s on their smartphones, tablets, desktop computers or right in her mailbox. The digital product gives Essence the platform to talk about daily issues and more immediate news while the print product gives them a chance to do what Vanessa says the magazine does best which is advocacy journalism.

All in all, it was a great conversation that gave myself and the other  women in the room a peek behind the curtain and into the mind of a woman charged with steering such an important brand and platform. It also gave me a lot to think about in terms of my own career and how going forward I need to prioritize my health and overall wellbeing and stay committed to the things and people who matter most in my life.

If you missed out on attending this event but would like a chance to meet Vanessa, she’ll be moderating an all-male panel at ColorComm’s inaugural conference in August which will focus on the perceptions of women of color in business.

Bonus: Vanessa mentioned that she wants to bring back SUEDE Magazine and I almost levitated out of my chair. Can everyone send her tweets and emails so that we can make this happen?