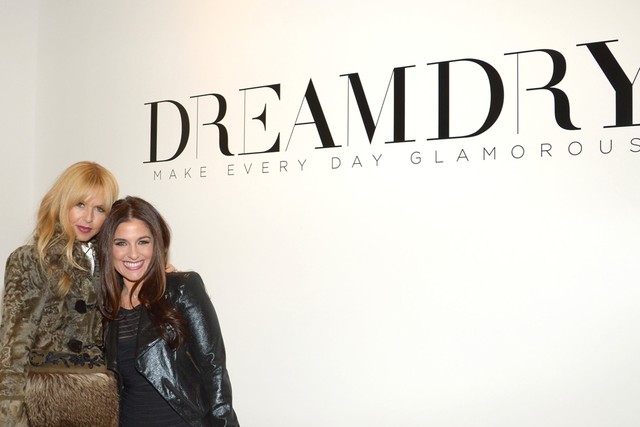 Rachel Zoe’s newest business inspired by her experience as a celebrity fashion stylist is a hair salon chain called DreamDry, which she hopes to roll out nationally by the year’s end. “I really set out to be a good stylist, and since that time 15 years ago, I’ve been making businesses out of my passions and what I love,” said Zoe, who launched her fashion line in 2011 and serves as a chief stylist for curated e-commerce shoe site Shoedazzle. “The constant in all the businesses I’ve become a part of is taking what I do and making it real for everyone. I believe fantasy and dreaming can be made a reality. You don’t have to be rich. You don’t have to be a VIP.” Read More at WWD

2. Facebook Working on Incorporating the Hashtag
Facebook is working on incorporating the hashtag, one of Twitter Inc.’s most iconic markers, into its service, said people familiar with the matter. It is unclear how far along Facebook’s work on the hashtag is and the feature isn’t being introduced imminently, these people said.

On short-messaging service Twitter, the hashtag—a word or phrase preceded by the “#” pound symbol—is a way for users to collate many Twitter messages about a single news event or topic, like the selection of the Pope (#PopeFrancis). The hashtag is closely associated with Twitter, and fans of the service use the hashtag as short-form creative expression. Read More at WSJ

3. J.C. Penney to Challenge Zara to Uniqlo with Joe Fresh
J.C. Penney Co. (JCP) will open Joe Fresh shops in most of its stores [today], a key test of Chief Executive Officer Ron Johnson’s strategy to turn most of the chain’s locations into collections of boutiques.

Joe Fresh, the apparel brand owned by Canadian grocer Loblaw Cos. (L), will be in 681 of J.C. Penney’s 1,100 stores and carry items such as patterned pants and silk short-sleeved blouses, for mostly under $40, Siiri Dougherty, J.C. Penney’s general merchandise manager of women’s apparel, said in a telephone interview yesterday. J.C. Penney will advertise the brand online, through direct mail and in stores, which will each hold a sweepstakes to win months of Joe Fresh apparel, she said. Read More at Bloomberg

4. Lillian Cahn, Creator of the Coach Handbag, Dies at 89
Lillian Cahn, who founded the Coach Leatherware Company in a Manhattan loft in 1961 with her husband, Miles, and went on to help produce the “shopping bag” tote and other handbags that have become ubiquitous accessories in the wardrobes of well-heeled American women, died [last week] in Manhattan. She was 89. Read More at NYT

5. Flipboard Looking to Fill Void Left by Google Reader
[Yesterday], Google announced it’s going to retire Google Reader. If the service has been an essential part of your media diet, don’t despair. Your Google Reader subscriptions will be safe on Flipboard. Read More at Flipboard

6. Martha Stewart’s Best Lesson: Don’t Give a Damn
Martha couldn’t care less if you agree that pomegranate-seed-removal is an everyday skill, whether you like her particular method of doing so, or if you’re annoyed by her way of communicating it to you. She is absolutely convinced that if you heed her advice, you’ll be happier. She’s relentlessly selling her own taste and vision, and she assumes she will earn your affection because you’ll become dependent on her particular way of doing things.

She became one of America’s first self-made female billionaires on the strength of her own good ideas and her willingness to sell them. This very entrepreneurial spirit has her back in court this month — this time because Macy’s claims she agreed to sell her products in their stores exclusively, then turned around and created a pop-up shop for J.C. Penney. When asked by Macy’s lawyer Ted Grossman whether people really buy or need two Martha Stewart casserole dishes from two different department stores, Martha replied, “They might have two houses. They might have two kitchens!” Read More at NYMag