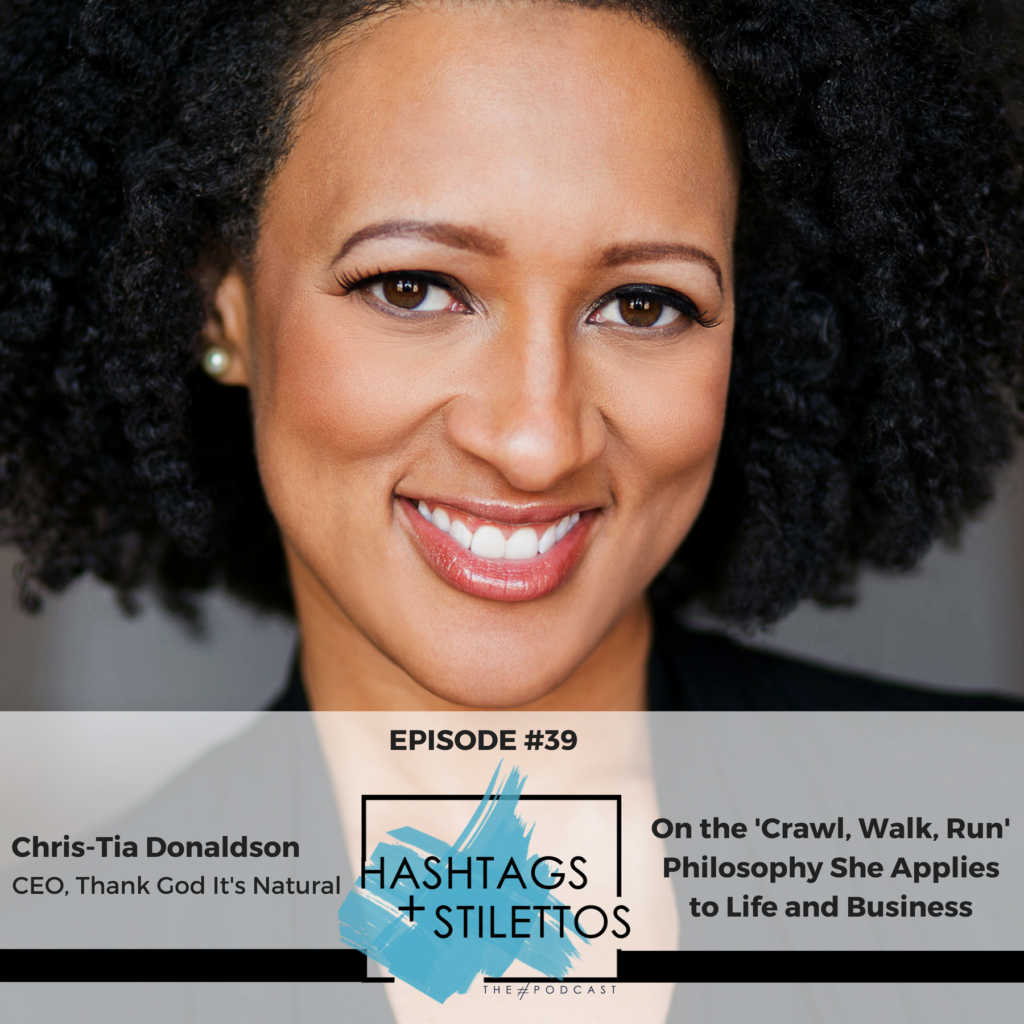 Chris-Tia Donaldson (@TGINCEO) is the founder and CEO of Thank God It’s Natural (TGIN), a company that manufactures all natural hair and skin care products that she launched in 2013.

A few years before she launched the company, she wrote her first book called ‘Thank God I’m Natural: The Ultimate Guide to Caring for Natural Hair,’ which would go on to become an Amazon bestseller and a resource Essence magazine called the ultimate hair bible.

Like so many entrepreneurs and authors before her, Chris-Tia wrote the book and started TGIN to address her own needs.

Feeling empowered after graduating from Harvard Law and joining the fast paced world of corporate America, Chris-Tia still wrestled with the idea that in that environment, straight hair would be viewed as more appropriate and professional and so she started wearing a wig to work.

Over time, she realized that the notion that Black women should have to cover the kinky or curly hair that naturally grows out of our head in order to be accepted in the workplace just didn’t make any sense. Thus began her journey of reconciliation, first with herself and then through sharing her experience in the book she’s been able to ensure that thousands of other women never feel the need to compromise their own natural beauty based on society’s definition of it.

After the success of the book and the successful launch of ‘Thank God It’s Natural,’ the brand, Chris-Tia continued to work her full time job as corporate counsel at a Fortune 100 company until literally 2 and a half months ago.

On this episode, I talked with Chris-Tia about her incredible career and entrepreneurial journey so far, how being diagnosed with and surviving breast cancer has influenced and changed her business philosophy and outlook on life, what’s it’s been like working a high-powered job while also running a business that seems to keep growing by the day and so much more.

[Tweet “”Crawl, Walk and Run Toward Your Dreams,” – @TGINCEO on #HashtagsandStilettos”]

[Tweet “”You have to slow down in order to speed up,” – @TGINCEO on #HashtagsandStilettos”]

[Tweet “”It’s okay to not be OKAY,” – @TGINCEO on #HashtagsandStilettos”]

[Tweet “”Work is our morphine. It numbs the pain,” – @TGINCEO on #HashtagsandStilettos”]

← Podcast: How Demetria Lucas D’Oyley is Writing Her Way to a Life on Her Own Terms
Podcast: If You Drop the Ball, Pick It Up →