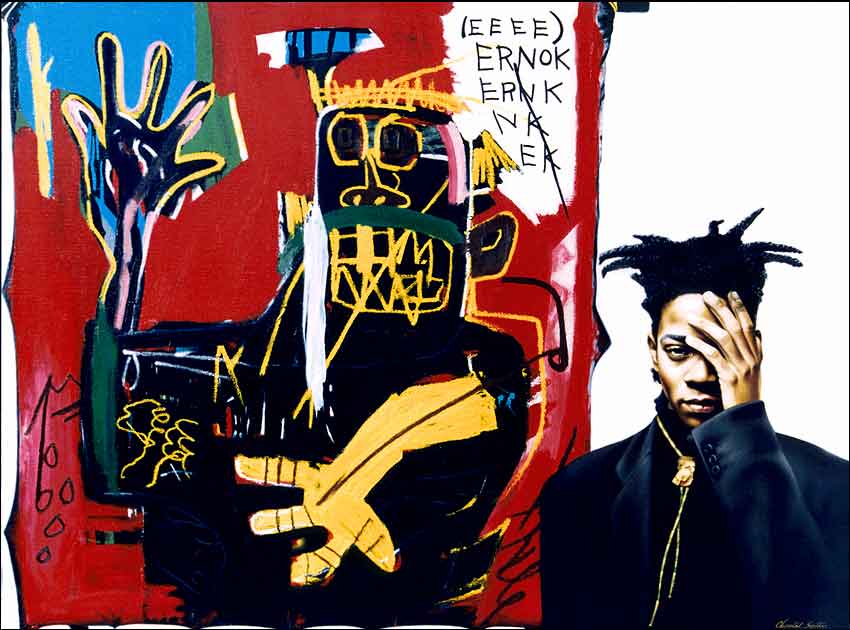 I’ve been intrigued by the life and legacy of Jean-Michel Basquiat from the moment I learned his name. The late, now globally revered artist, died in 1988 at the age of 27 from a drug overdose. I was still a baby.

In spite of the trove of paintings and drawings he left behind and the photos, articles and documentaries there are still more questions about his life than there are answers; which only enhances his legend.

Stephen Torton, the artist’s assistant between 1982 and 1983, told DNAInfo that Gerard’s tenacity helped send the prices of Jean-Michel’s art soaring.

“I think he did an incredible job of making sure his son’s work was not sold cheaply,” said Torton. “You could not publish anything that included Jean-Michel without his approval. … He really ran [Jean-Michel’s estate] like a kingdom. He wasn’t a compromiser and a sharer.”

[Basquiat’s father] tightly controlled his son’s copyrights, methodically poring over movie scripts, biographies or gallery show publications that wanted to use his son’s works or images. He also devoted countless hours to stewarding an authentication committee that reviewed submitted pieces of art purporting to be by his son.

Which makes me wonder, if Gerard Basquiat were still alive, would he have approved of a new photo exhibit by the artist’s former girlfriend Paige Powell that exclusively features nude photos of him.

A little over a week ago, after reading about Paige Powell’s Jean-Michel Basquiat, Reclining Nude exhibit, I decided to go to the Suzanne Geiss Company to see what it was all about.

Pre-opening press suggested that the photos would be intimate and the exhibit’s own title isn’t exactly subtle, but I was still a bit taken aback to see the gigantic nude canvases of the artist.

To her credit, Powell, a photographer and former assistant to Andy Warhol, captured a lot of images from that era. But these were supposed to be private moments with her partner. And yet here they were being shared with the public for no rhyme or reason, no story to tie them together other than Powell’s own assertion that Jean-Michel “would love these.” Would he? How can we be sure of this when he’s not here to tell us himself?

After walking around- and watching people file in and out of the gallery, I became uncomfortable. And then I got upset because the whole thing felt more like exploitation than a celebration of- or homage to Basquiat’s legacy or the love they allegedly once shared.

It reminded me of the historical practice of putting black bodies on display for others to poke, prod, gawk at and profit from.

But maybe I’m just overreacting. Maybe he really would have loved it.

← BLOGLOVIN’: A Better Way to Keep Up with Hashtags + Stilettos
10 DIY PR Tips That Will Help You Become Your Own Publicist →