How do you name a PR Firm, of all things, after a poem and song about the lynching of Black people in America?

That’s the question I found myself asking in vain on Saturday night when I discovered that Ali Slutsky and Mary Mickel, co-owners of the 2 year old hospitality PR firm, Strange Fruit PR, had done just that.

When a tweet about the racial insensitivity of their businesses’ name was retweeted onto my timeline, I immediately shook my head and hoped that maybe this was a troll account looking to provoke people who were already hurt and outraged over the recent non-indictments of the police who murdered Michael Brown, Eric Garner and others.

But when I clicked through to the @StrangeFruitPR timeline (they have since deleted their entire online identity), what I found was an attempt to swat off the criticism and whitewash the painful historical meaning of “strange fruit” as this optimistic vision of “community” that the original writer and artist had “hoped” would exist. 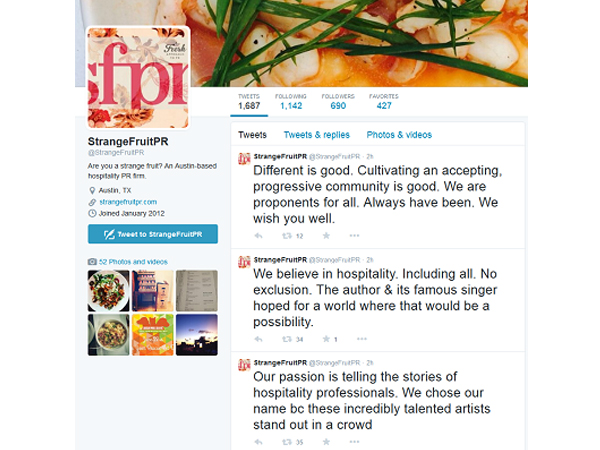 But “Strange Fruit” was not optimistic. It was not hopeful. It was a 91 word protest poem written by Abel Meeropol and first sung by Billie Holiday in 1939 that vividly depicted the depraved and brutal murders of Black men and women across this country; its lyrics searing a mental picture of what those murder scenes were like into your mind:

Here is a fruit for the crows to pluck
For the rain to gather, for the wind to suck
For the sun to rot, for the tree to drop
Here is a strange and bitter crop

And if the mental picture was not enough, proof that these crimes took place was readily available in the form of photos and postcards that were sold as souvenirs and keepsakes to those who couldn’t attend the show. In fact, it was this 1930 postcard image of the lynching of Abram Smith and Thomas Shipp that prompted Meeropol to write “Strange Fruit” in the first place:

So when Ali and Mary say they thought the term could “stand for someone who stood out in a crowd” is the above image of Smith and Shipp what they had in mind?

How Could This Happen?

How could you, a year ago, when someone actually asked if your firm name raised any red flags, casually respond that you were “definitely aware of the song but our name has no affiliation to the connotation. We just love to talk food and drink.”

How Could You?
The NY Daily News asked Slutsky and Mickel this question and they said:

So in other words, they knew, but they still chose to ignore.