Ali Slutsky and Mary Mickel, owners of that Austin-based PR firm named after a poem and song about the lynching of African Americans, moved quickly to change and announce its new name: Perennial Public Relations.

In doing so, they also continued to fail at PR by announcing the name to the press without first securing their social media handles. So now there’s a @PerennialPR parody account on twitter that links to the NAACP’s website: 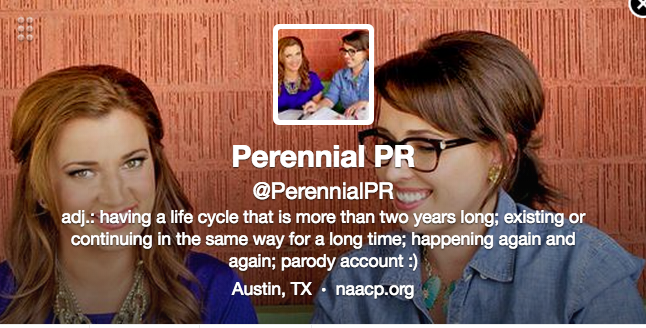 The girls probably felt that they should lay low on social media due to the recent backlash, which is totally understandable.  But if you have even the most basic knowledge about PR and social media you know how important it is to secure your business handles, even if you don’t intend to use the accounts right away.

A little PR advice for Ali and Mary: Leave. Take the rest of 2014 off and try again next year.

← #StrangeFruitPR: How Do You Name Your PR Firm After A Song About Lynching?
Best of 2014: Hashtags+Stilettos Interviews →