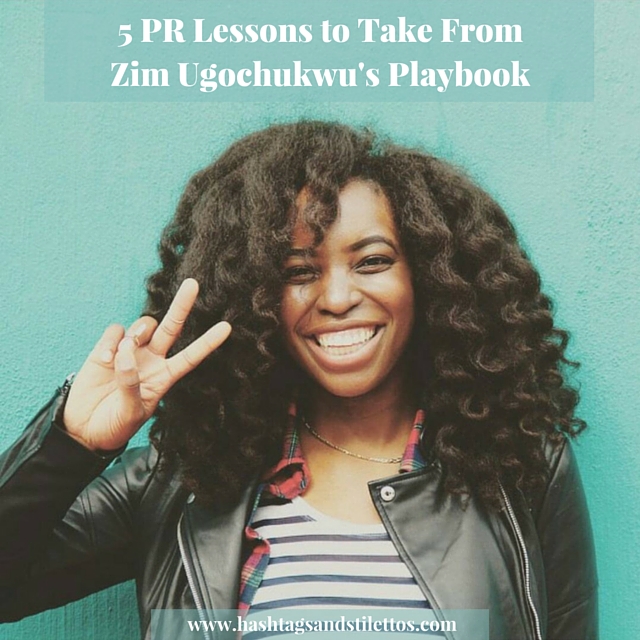 Zim Ugochukwu
is the CEO and founder of Travel Noire. When Travel Noire launched a little over a year ago as a digital publishing platform and resource for black travelers, I immediately reached out to her for an interview because I thought what she was doing was both brilliant and necessary.

Since the interview, I have learned, traveled and watched as Zim has grown the Travel Noire platform to the point where they can sell out of all 110 slots for a curated destination package in 90 minutes.

While there’s a lot that can be said about her business acumen and singular vision, I want to focus on her public relations strategy and how she’s been able to skillfully leverage content, product and media to Travel Noire’s advantage.

Know Your Audience and Delight Them with High Value Touch Points

When you know your audience you can put the blinders on and focus obsessively on creating content and/or products that meet their needs.

In the early days of Travel Noire, that meant finding and reposting an enviable and endless stream of images of black travelers around the globe for inspiration and providing destination reviews and hacks to make the travel experience less daunting. They’ve since added additional products and partnerships and will begin embarking on curated group trips this Fall.

As important as it is to know your audience, you need to also name your audience. Naming your audience helps them find you. Establishing clarity around who you want your business to serve and speaking directly to that audience through your product and service offering is essential for business growth.

Media coverage can have a number of positive effects on your business. It can add credibility, trigger future sales or trial use of products from existing or potential customers and it can enhance your visibility within your industry and expand your reach.

Since Travel Noire’s launch, Zim has either been interviewed by or featured in the New York Times, the CBS Morning Show, Essence Magazine, The Daily Beast, Madame Noire and more. Participating in and sharing these media opps on her personal and professional digital platforms has given Zim an opportunity to shape the message around not only what/who Travel Noire is, but also draw attention to a number of travel industry trends and shine a spotlight on the lack of diversity in destination/tourism marketing.

Each interview or feature aids in the process of positioning Zim as an industry expert while also getting her brand in front of new people. It’s safe to say that some of those people could be other travel industry CEOs or executives who will reach out to Zim to establish new partnerships, writers who will reach out to request their own interview and black travel enthusiasts who’ve been waiting and hoping for a tribe and resource like Travel Noire to come along for their entire lives.

Become a Thought Leader and Industry Expert By Sharing Your Story

But Zim doesn’t stop there.

A mistake would be to completely rely on inbound media opportunities and coverage to get your message out, but that puts the power in someone else’s hands. A great way to remain in control of your own narrative is to share video messages, write op-eds or create a blog.

There, she is able to tell the Travel Noire story in her own words.

Use Social Media to Create a Real Human Connection

Those words, the ones that she shares on Medium, in the Travel Noire emails/newsletters and on social media help to add a real human connection to the brand.

When a business owner or executive is transparent about their accomplishments, shortcomings and their process, it is endearing and inspiring and can help create brand loyalty amongst consumers or casual fans.

Zim and Travel Noire employ a personal and familial touch across all of their social media platforms.

For example, on @TravelNoire‘s instagram page, you’ll find swoon-worthy imagery of black travelers globetrotting around the world. While on Zim’s personal instagram page (@Zimism), you’ll see images and stories about how she runs the business, photos from recent excursions and quotes and daily musings that inspire her. On her snapchat (also zimism) she shares behind the scenes videos of product launches and provides a glimpse into her day-to-day activities.

Her posts evoke the confidence and directness of someone with experience but the tone is always encouraging and never condescending, which is key if you want to establish a community of supporters, evangelists and cheerleaders instead of haters.

Create Something Valuable and Make It Scarce

One of the things that I noticed about Travel Noire and that Zim confirmed via a recent blog post, is that they purposely “operate on a low-inventory strategy” to keep “their demand high and inventory manageable.”

Going back to the example I mentioned earlier about them selling out all 110 TN Experiences slots, they could have easily staggered the launches and announced new trips one by one, but instead they were able to create a groundswell of demand by having people who were interested in a specific destination sign up for a waiting list before the launch went live. This provided the Travel Noire team with additional data points about demand for each location and the number of people that were more likely to actually purchase the product.

An even smarter move?

They created a $15 limited edition glitch fare guide packed with travel tips and resources called the ‘Noire Hack Pack’ that they promoted alongside the TN Experiences packages. So if you missed out on the destination deal, you could still walk away with a nice consolation prize until the Fall registration, while Travel Noire earned yet another stream of revenue.

Zim confirmed via email that Travel Noire does not employ a PR firm or an in-house publicist.
She was not interviewed for this post.

← 20 Ways to Delight Existing Customers and Win New Ones By Adding a Personal Touch (FREE DOWNLOAD)
72 Hours in Rome, Italy →